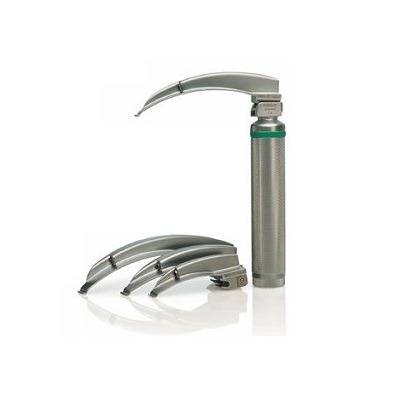 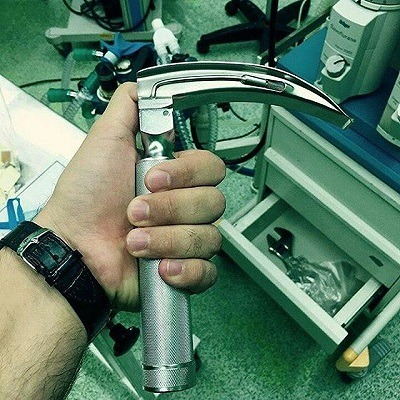 “Laryngoscope” redirects here. For the journal, see The Laryngoscope.

Laryngoscopy (/ˌlærɪŋˈɡɒskəpi/) is endoscopy of the larynx, a part of the throat. It is a medical procedure that is used to obtain a view, for example, of the vocal folds and the glottis.

Laryngoscopy may be performed to facilitate tracheal intubation during general anaesthesia or cardiopulmonary resuscitation or for surgical procedures on the larynx or other parts of the upper tracheobronchial tree. 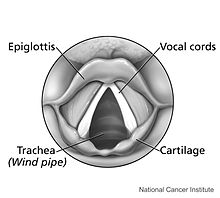 Direct laryngoscopy is carried out (usually) with the patient lying on his or her back; the laryngoscope is inserted into the mouth

on the right side and flipped to the left to trap and move the tongue out of the line of sight, and, depending on the type of

blade used, inserted either anterior or posterior to the epiglottis and then lifted with an upwards and forward motion (“away from you and towards the roof “).

This move makes a view of the glottis possible. This procedure is done in an operation theatre with full preparation for

resuscitative measures to deal with respiratory distress. There are at least ten different types of laryngoscope used for this

procedure, each of which has a specialized use for the otolaryngologist and medical speech pathologist.

This procedure is most often employed by anaesthetists for endotracheal intubation under general anaesthesia, but also in direct

diagnostic laryngoscopy with biopsy. It is extremely uncomfortable and is not typically performed on conscious patients, or on patients with an intact gag reflex.

direct line of sight (e.g. a mirror). For the purpose of intubation, this is facilitated by fiberoptic bronchoscopes, video

Some historians (for example, Morell Mackenzie) credit Benjamin Guy Babington (1794–۱۸۶۶), who called his device the

“glottiscope”, with the invention of the laryngoscope. Philipp von Bozzini (1773–۱۸۰۹) and Garignard de la Tour were other early

physicians to use mouth mirrors to inspect the oropharynx and hypopharynx.

In 1854, a Spanishvocal pedagogist named Manuel García (1805–۱۹۰۶) became the first man to view the functioning glottis and

larynx in a living human. García developed a tool that used two mirrors for which the Sun served as an external light source.

Using this device, he was able to observe the function of his own glottic apparatus and the uppermost portion of his trachea. He

presented his findings at the Royal Society of London in 1855.

All previous observations of the glottis and larynx had been performed under indirect vision (using mirrors) until 23 April 1895, 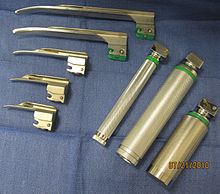 The vast majority of tracheal intubations involve the use of a viewing instrument of one type or another.

Since its introduction by Kirstein in 1895, the conventional laryngoscope has been the most popular device used for this purpose.

Today, the conventional laryngoscope consists of a handle containing batteries with a light source, and a set of interchangeable blades.

upon; however the blade is difficult to control in adult humans and can cause pressure on the vagus nerve, which can cause