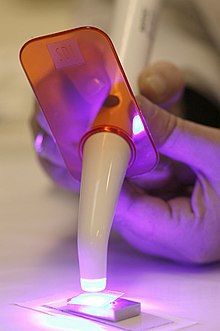 It can be used on several different dental materials that are curable by light.

The light used falls under the visible blue light spectrum. This light is delivered over a range of

wavelengths and varies for each type of device.

diodes (LED), plasma arcs, and lasers. The two most common are halogen and LEDs.

In order for the light to be produced, an electric current flows through a thin tungsten filament,

which functions as a resistor.

This resistor is then “heated to temperatures of about 3,000 Kelvin, it becomes incandescent and

emits infrared and electromagnetic radiation in the form of visible light”.

of curing light however has certain drawbacks, the first of which is the large amounts of heat that

The fan generates a sound that may disturb some patients, and the wattage of the bulb is such (e.g.

۸۰W) these curing lights must be plugged into a power source, that is, they are not cordless.

because of the high temperatures that are reached.

(For example, one model uses a bulb with an estimated life of 50 hours which would require annual

replacement, assuming 12 minutes’ use per day, 250 days per year.) Also, the time needed to fully

cure the material is much more than the LED curing light. 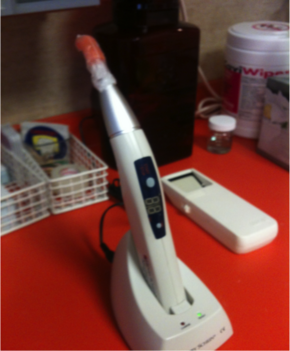 the dental material. LEDs as light-curing sources were first suggested in the literature in 1995.

A short history of LED curing in dentistry was published in 2013.This light uses a gallium nitride-

based semiconductor for blue light emission

A 2004 article in the American Dental Association’s journal explained, “In LED’s, a voltage is applied

across the junctions of two doped semi- conductors (n-doped and p-doped), resulting in the

generation and emission of light in a specific wavelength range.

By controlling the chemical composition of the semiconductor combination, one can control the

۵۰۰-nm range (with a peak wavelength of about 460nm).

cool it. Since the fan was no longer needed, a more lightweight and smaller light could be designed.

The portability of it comes from the low consumption of power. The LED can now use rechargeable

batteries, making it much more comfortable and easier to use.

It uses a single high-intensity blue LED with a larger semiconductor crystal.

Light intensity and the illumination area has been increased with an output of 1,000 mW/cm2.In

order to emit such a high intensity light, it uses a highly reflective mirror film consisting of

The halogen and LED curing light are operated similarly. In order to turn on the blue light, both of

these lights require the operator to press a button or a trigger.

For the halogen curing lights, there is a trigger that is pressed. The older models require the

trigger be pressed once.

For the LED lights, a button is placed on the device. For both the newer models of the halogen lights

and the LED lights, after the trigger or button is pressed, the light will remain on until the timer

After the light is on, it is placed directly over the tooth that has the material in it until it is cured.